Before we get started with Beer Fest, let’s take a moment to recall my first trip to Shojin the day before. The first time I heard about this place was when I was told how crappy the service was and the person swore off the place for life for being treated so rudely. Let me say my experience was nothing but awesome! Everyone was crazy nice and although I am not a fan of mood lighting, I loved the place. They go to great lengths to make you forget you’re in a mall next to a bowling alley. Not all the photos came out great, thanks to the romantic sexy time lighting, so here is what I was left with. All the food was top notch expect the dessert we got. Bleck! Never again! The brulee was not bruleed and the ice cream was not fun for my mouth. 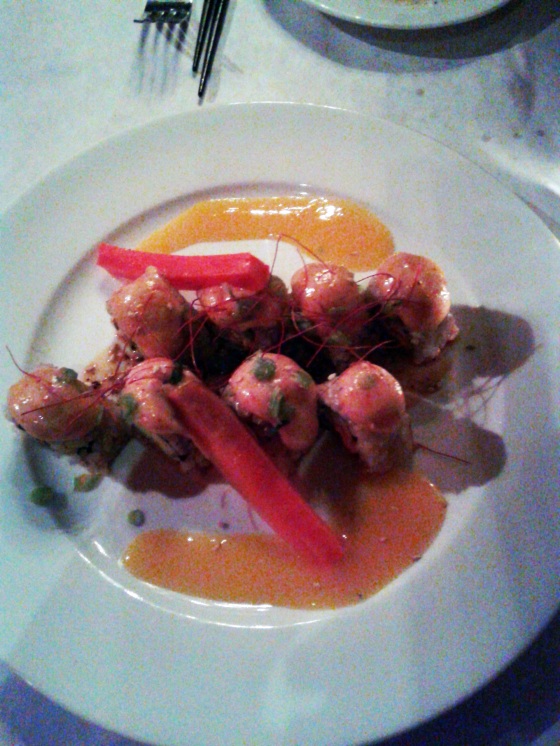 Shojin I forgot which roll

Here is a blurry picture of me smiling so hard because smiling’s my favorite!

Right when I walked in the buddy sightings started with Jackie of Vegan Yack Attack (no picture, sadly) and Jeshanah and Taylor of IE Vegan Meetup 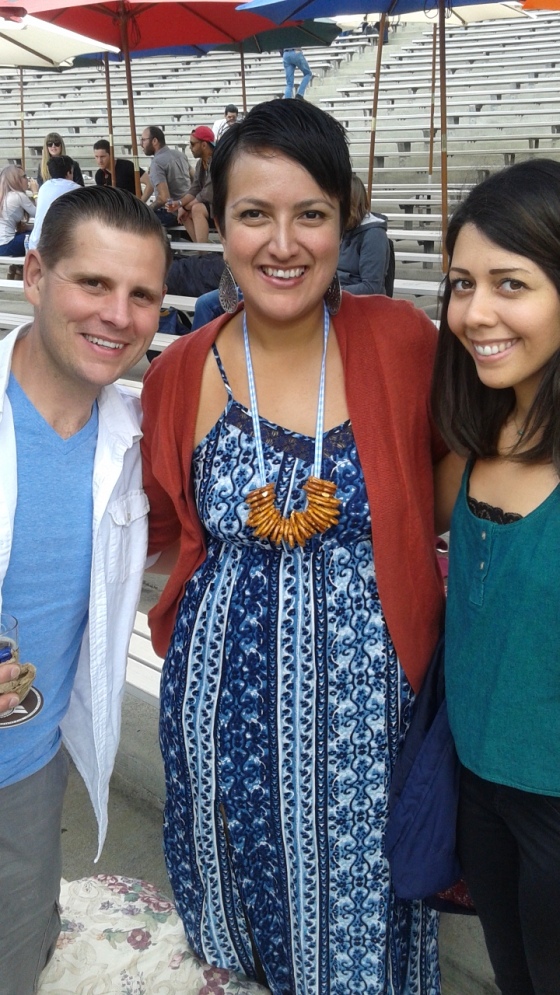 I missed out on their poptarts at Vegan Street Fair and I wasn’t going to let that happen again. I opted for the Strawberry Basil.  And good call with this tip jar. It totally worked on me. 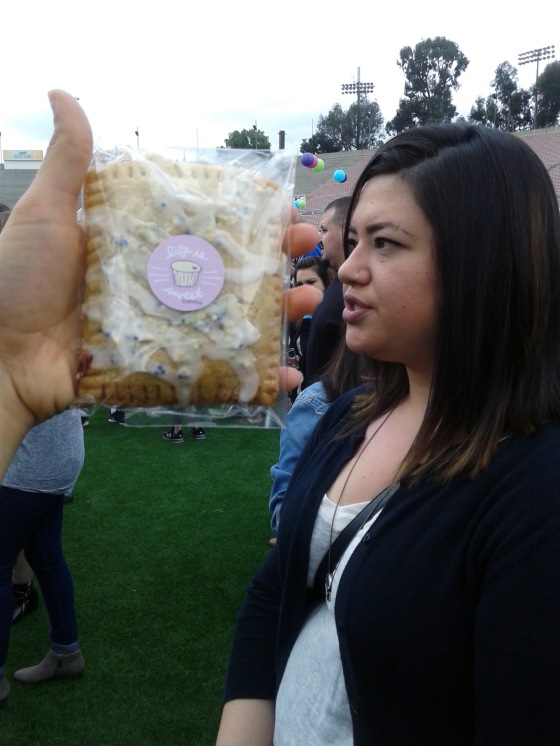 Next Stop was Garden Grill where I apparently felt like I had something to prove because I ordered The Thrillist which was a chicken bacon cheese burger with Ronald’s Doughnuts for buns. Let me just say that from 8pm until about 10pm, I regretted all food but before and after that I had no regrets. And that Triple Layer Rocky Road Cheesecake…my favorite of the day! (Though it spent the day being thrashed around in my backpack and I didn’t eat it until the next day and made the mistake of sharing it) 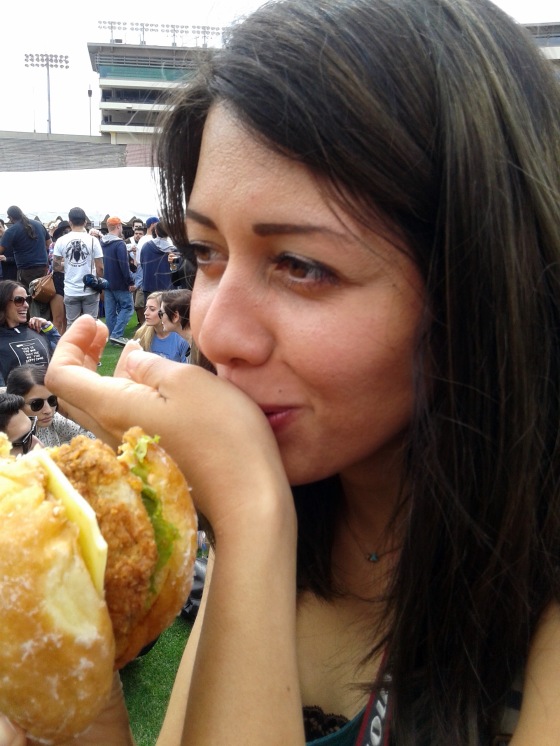 You can do it, put yo back into it

After that burger I needed a food break so I found my high school buds and we lounged a bit. 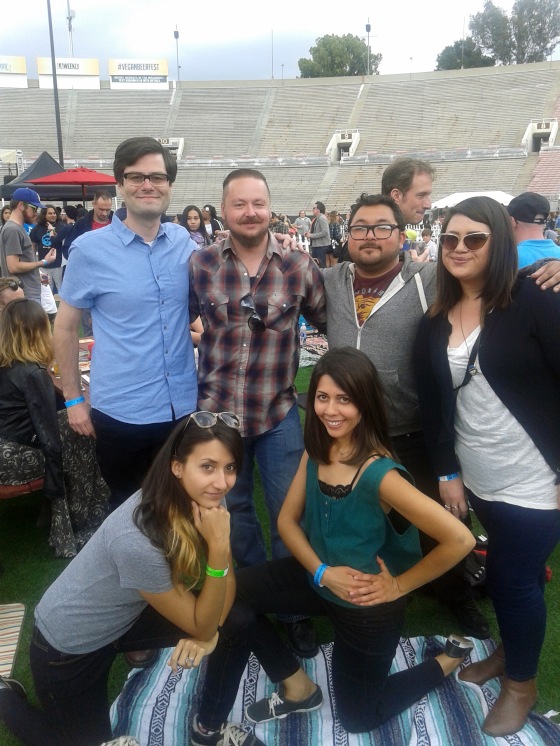 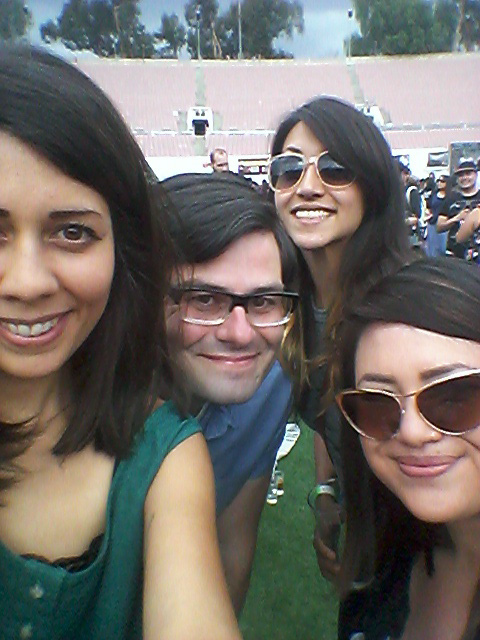 Michele and Daniel got some Mac and Yease from The Lusty Vegan. I tasted it. It was legit. Also, Johnathan is a total creep.

I then decided I needed Lusty Vegan Food as well and guess what…NO LINE! I snagged a picture with Ayinde and got sliders!

Bobby tryin’ to distract me so he can eat my sliders.

Ok let’s just get this out of the way. Here is Bobby tying to be candid and nonchalant. 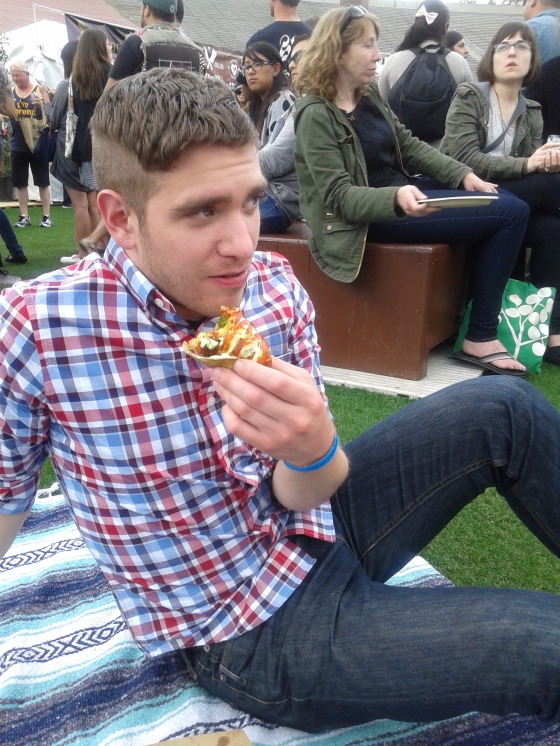 Whatever, he had a new shirt so I entertained his ego for a little while. Now Back to food at the Garden Grill . 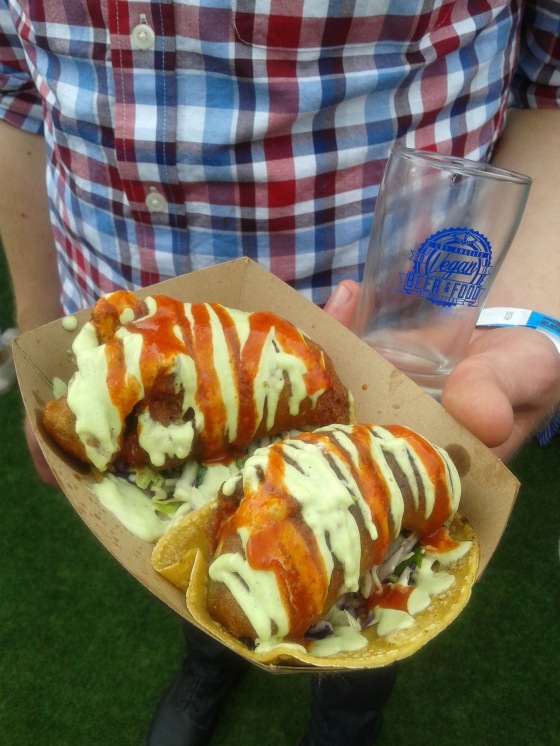 Beefsteak was out of control with it’s liquid nitrogen ice cream! This dude was about to bust out of his shirt from ice cream buffness.

Bobby poured some beer in his ice cream and made a beef float!

Imminently following this was more dessert at the Real Food Daily booth because they had maple bacon cronuts!

Beside tasting other people’s food, my last stop was Bramble Bakeshop for a Lemon Meringue Pie Macaroon. 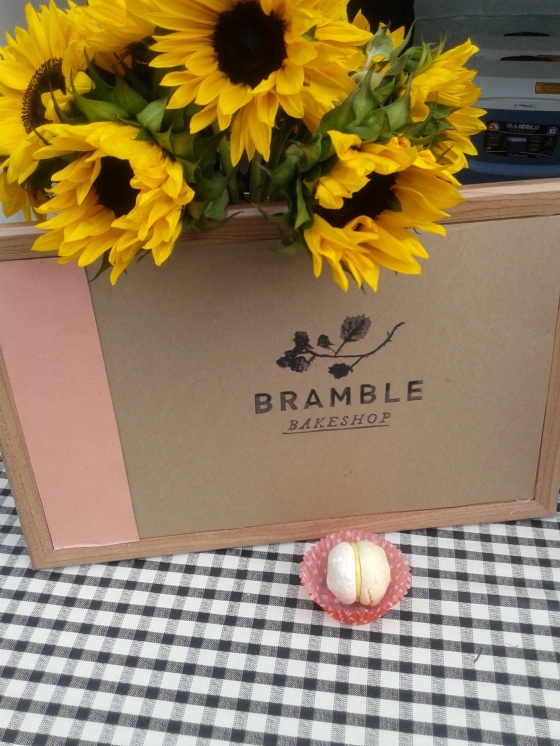 All in all I pretty much had the TIME OF MY FUCKING LIFE! Lines were not soooo bad and there was plenty of room so it wasn’t claustrophobic. I met a bunch of my IG buds and even made a few food adventure dates. Saw a ton of friends and ate great food. Cheers all around.

P.S. the next day was brunch at Crossroads which was to die for. And I saw Jason Schwartzmand and Mike White!

Oh ya…then Donut Friend. Duh. Bobby is my DFF (but I was still doughnut wasted from the day before)