The long awaited, highly anticipated, Vegan Street Fair took place yesterday. I’d had a fever for five days and it was lookin’ like I wasn’t going to make it. I was utterly crushed. Magically I made an ok enough recovery to get my arse outta bed (and into my sisser’s car) to make it to the fair!

I was bestowed a blogger pass which was beyond cool! Bloggers were let in an hour early to look around, mingle, get food tickets before the masses ( which turned out to be a MAJOR perk) and were able to get food 30 minutes before the fair opened. 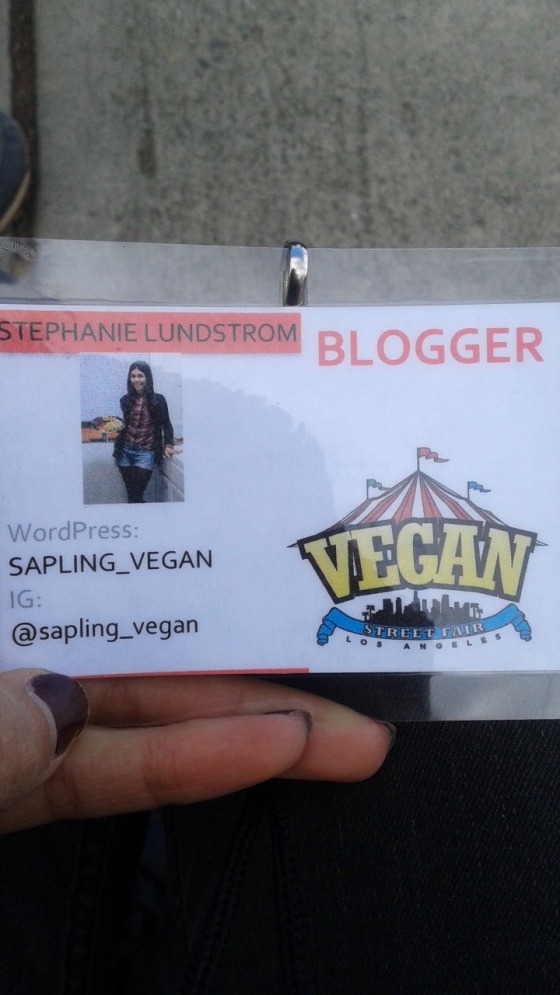 So sisser and I got our tickets and got started. Sis went to One World  because the first 100 people got a tote.

Then she found FREE Stumptown Coffee. Lookin’ like a straight up cop wife.

I knew the Whole Foods Glendale booth was going to have lavendar creme brulee and ravioli so that was my first stop. The creme brulee was so very good. The ravioli wasn’t even an actual ravioli; it was two chewy pieces of greasy dough with salty cheese between them. I ate some of the cheese with the sauce and tossed the rest. Not worth the 5 (or however many tickets). 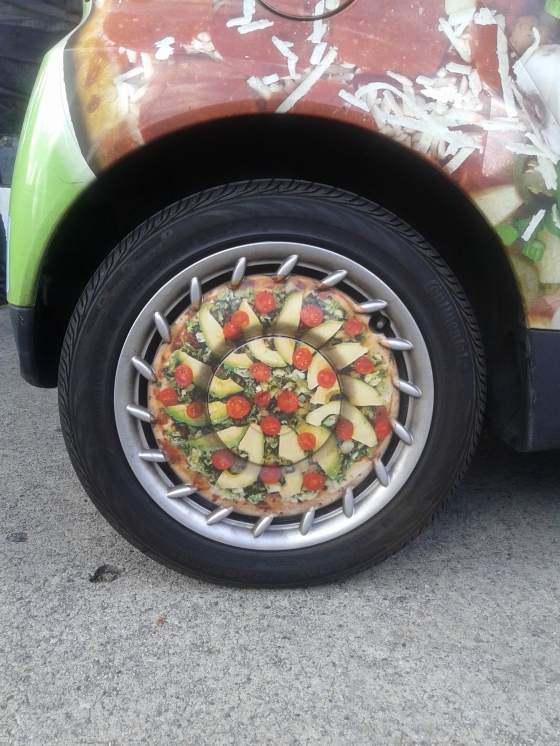 I liked that Azla Vegan  had Simpson stickers. I made sure to stop by for some.

Tried the new Follow Your Heart cheese with some tomato soup. I was having a hard time tasting with my stuffy nose but from what I could tell it was pretty good and my sis liked it too.

A high point was spotting these babes in shades wearing my shirt! I was wearing mine too but didn’t get a picture. Wah wah. Get your  own Vegan Doughnutarian shirt!

(L) Jessica, the coolest food scientist in town (R) Caroline reppin for Vegansaurus with Jackie of Vegan Yack Attack lurkin’ in the background 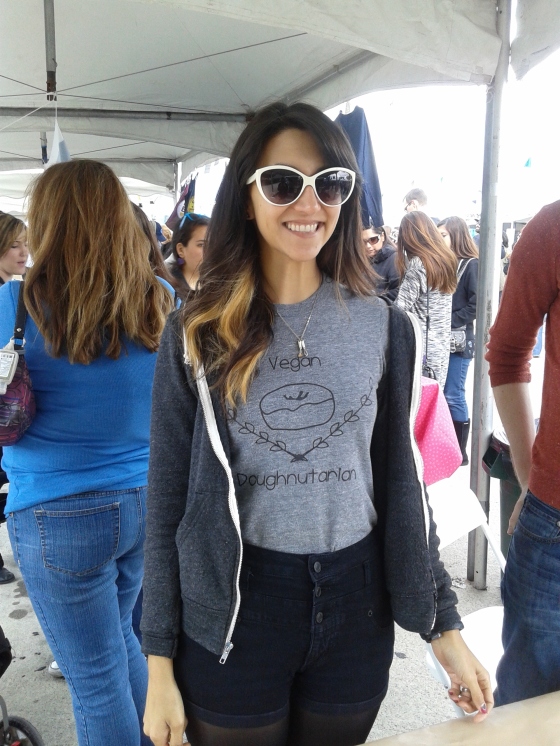 Here is Happy Cow. He had hairy arms… 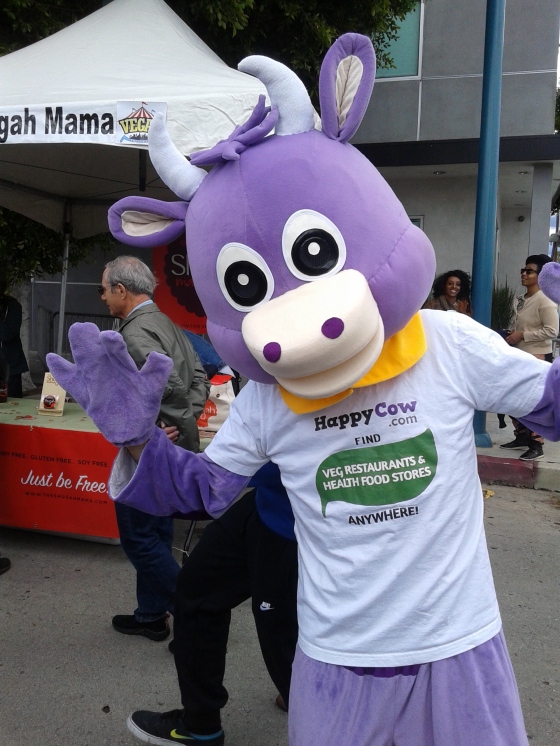 FINALLY got to taste a little of what Mud Hen Tavern has to offer. A Jackfruit Banh Mi! It was pretty good but I was feeling sick so I don’t know if I fully appreciated it. But the had flyers for 10% off your next Mud Hen visit so I’m going to make good use of that and get some pierogies!

I saw an Instagram post of a cute pink macaroon so I found out where that came from and got myself one as well. People were going IG crazy so I looked at posts to see what was good. I was led to Bramble Bakeshop and I got my very first macaroon. It was delicious! (I took it home and ate it there).

I also took home a s’more brownie (which was more like fudge) from Charlie’s Brownies and a cinnamon roll from Life is Sweet Bake Shop. I have had some disappointing rolls and but one was pretty good! No more mini stuff though, I want the whole thing!

Honestly, had we not been allowed in early to get tickets and food, it would have been a little miserable. It got really crowded really fast. I think the number of vendors was good, the space they were fit into was not. These things need to be in a REALLY wide open area so people can tell where lines end and begin  I got way too friendly with strangers as I tried to pass by them.  The people traffic jams were unavoidable. If it had been easier to navigate I would have bought more tickets and eaten more food. But I guess it all worked out because moments after getting in the car is when the hail store started and from the videos I saw, it looked wild (and also kinda fun…)! 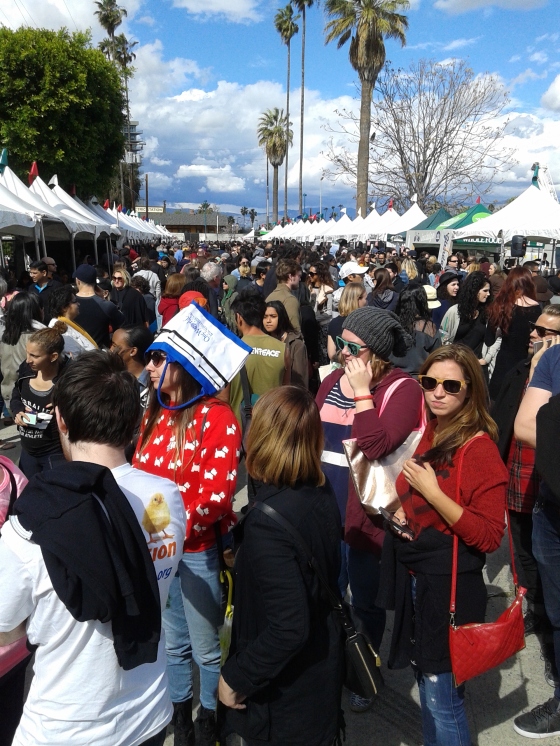 All in all we had fun and I can’t wait to see what changes they make for next year ($1 water please!)

Met a lot of buds and IG buds. Good times!